MOTO GUZZI FAST ENDURANCE: A MEMORABLE WEEKEND AT MUGELLO FOR THE EAGLE-BRAND CHAMPIONSHIP 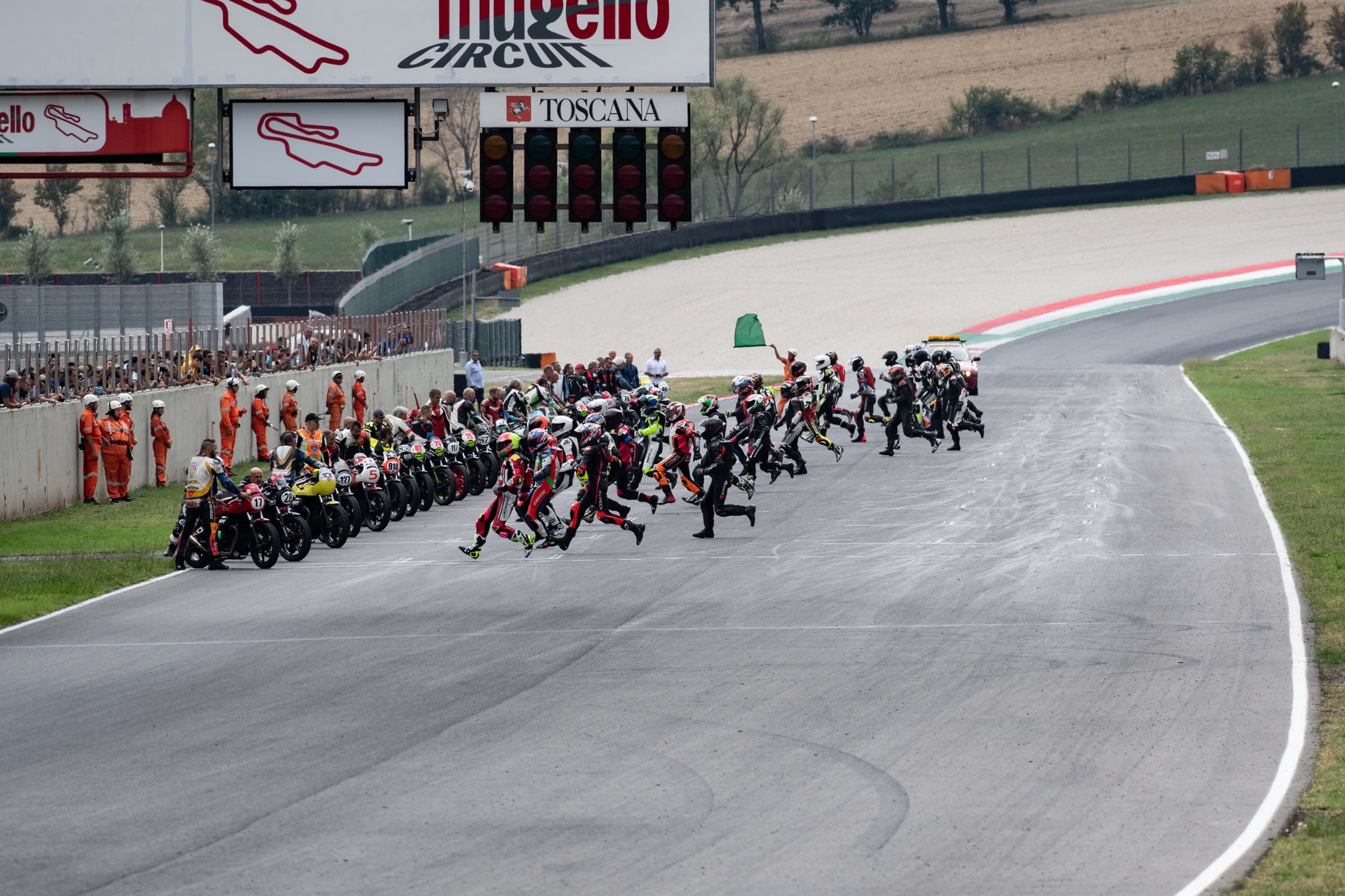 RECORD PARTICIPATION WITH 36 BIKES STARTING, ALL FINISHING AFTER 75 MINUTES OF RACING: THE BEST-SELLER FROM MANDELLO CONFIRMS HOW FAST, FUN, AND AFFORDABLE IT IS. TEAM 598 TAKES ANOTHER WIN TO CONSOLIDATE THEIR HOLD ON FIRST PLACE IN THE OVERALL STANDINGS. NUOVA M2 RACING ONCE AGAIN AT THE TOP IN THE 750 CATEGORY. THE TROPHY WILL BE DECIDED IN THE GRAND FINALE AT MISANO ON 15 AND 16 OCTOBER, WHERE IT WILL BE A NIGHT RACE.

Scarperia e San Piero, Mugello Circuit (Florence, Italy), 30 August 2022 - It was an unforgettable weekend for all the Moto Guzzi Fast Endurance Trophy riders at Mugello, the venue for the third round of the Eagle brand’s single-brand 2022 edition on 27 and 28 August. At its début on the spectacular and hilly Tuscan circuit, the Moto Guzzi V7 machines, outfitted with GCorse Racing Kits and Pirelli Phantom Sportscomp RS tyres, proved once again to be faster, fun, and above all reliable. In fact, on the most demanding track on the calendar, all 36 bikes at the start - a new record of participants in the Trophy - finished the spectacular “mini endurance” race. 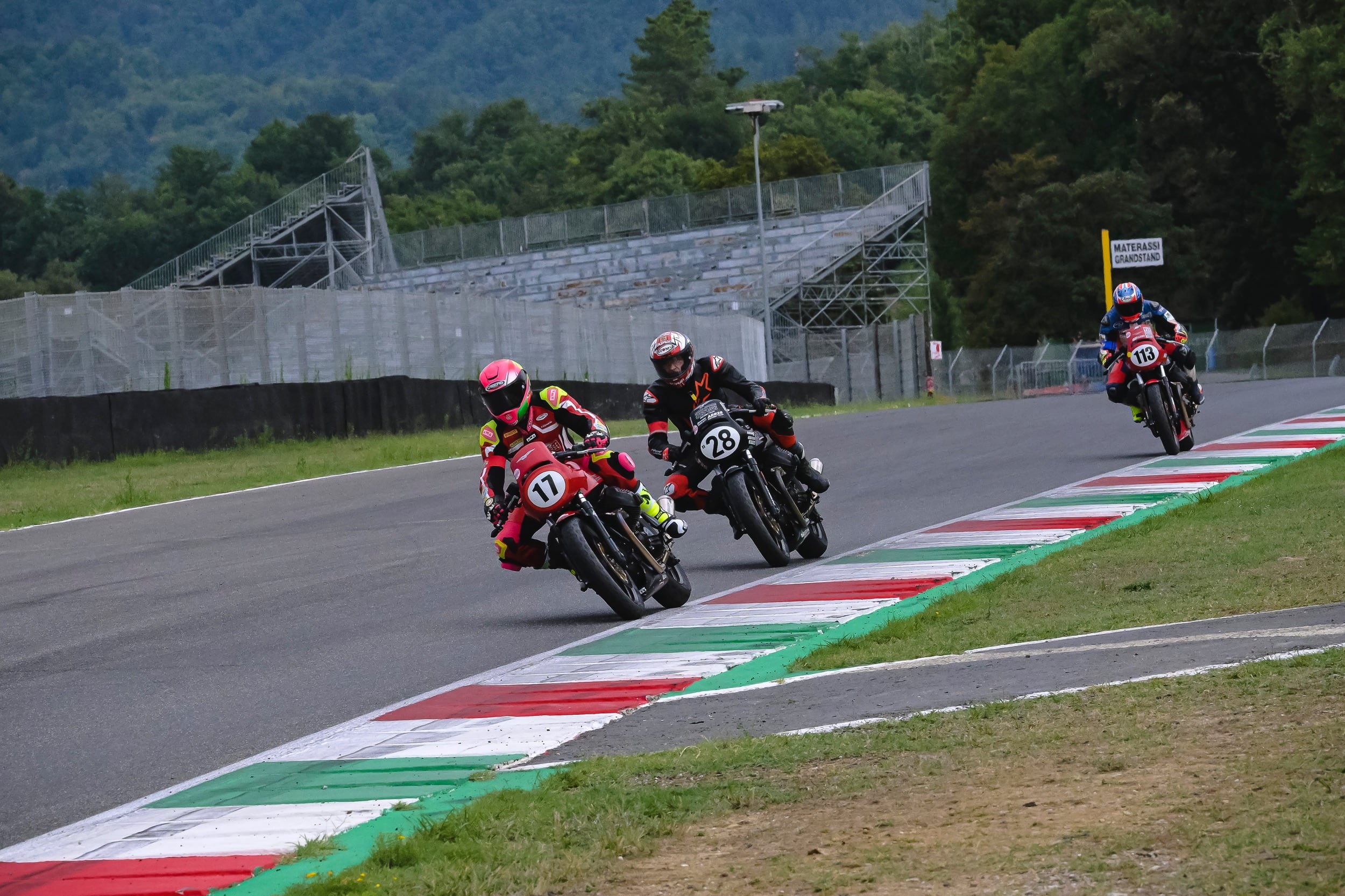 The Mugello round was one of the most highly anticipated of the season. Many of the 72 riders at the start had never put rubber on the legendary strip of asphalt that hosts the MotoGP Italian GP, and the Moto Guzzi Fast Endurance Trophy gave them the chance to make the dream of racing there come true. This is just the latest thrill in a championship unique in its kind, capable of bringing novices in their first experience on track into the racing world as well as bringing more expert and experienced riders back to the track who, astride the V7 Trophy, have rediscovered the joy of racing whilst having fun.
This is the case, for example, of Marco Lucchinelli. After trying out the V7 Trophy, the 1981 world champion in the 500 category accepted the invitation from Officine Italiane Zard - supplier of the GCorse Racing Kit exhaust system - participating in the Mugello race as a special guest, teaming up with another former World Championship GP Motorcycle Racing rider, Fausto Ricci, European 250 cc champion in 1988. Both astonished by the agile and fun ride of the V7 Trophy 750, “Lucky” and Ricci finished the race with a good sixth place in class. 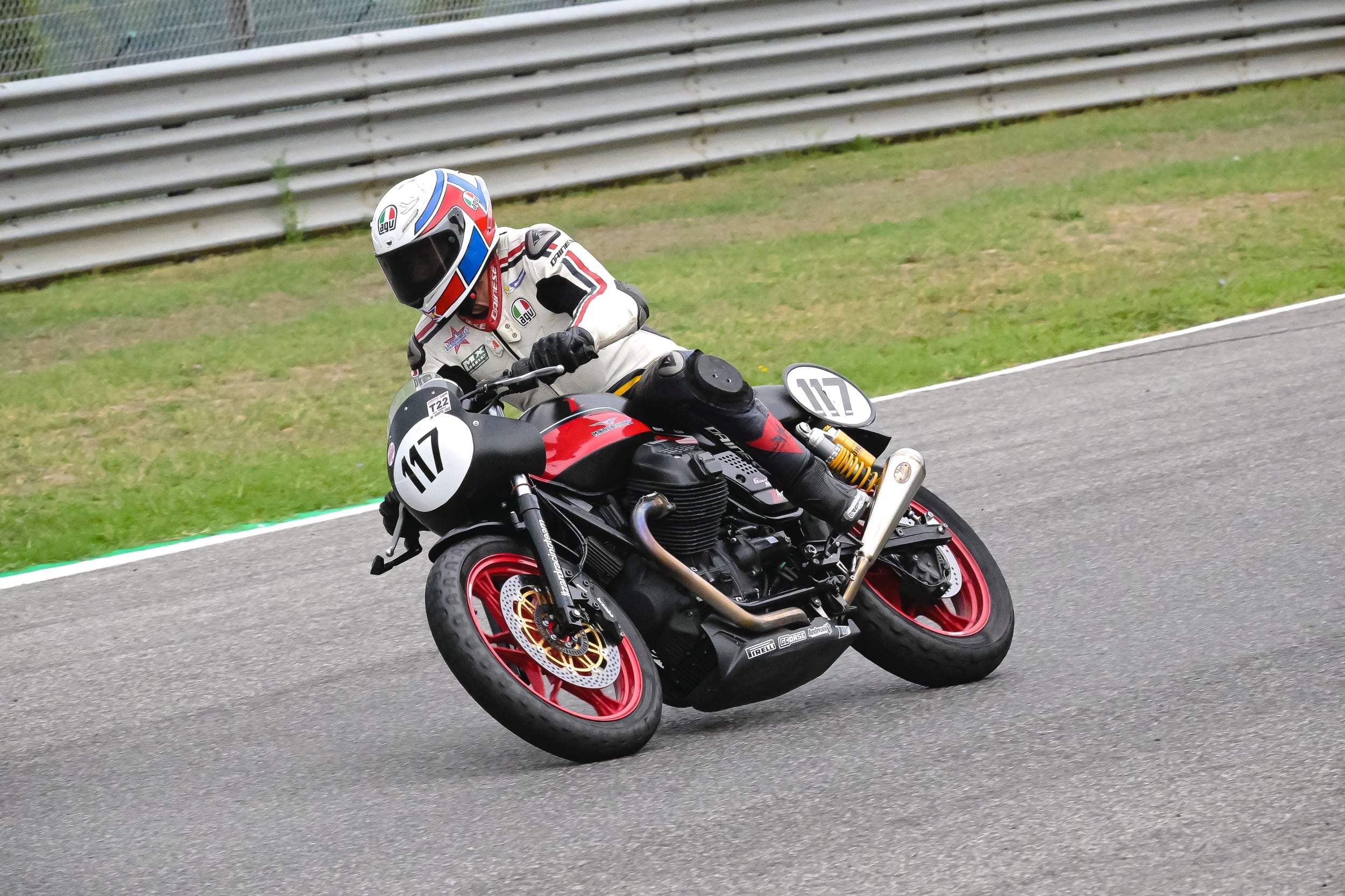 Marco Lucchinelli on the track at Mugello: he participated as a special guest in the Moto Guzzi Fast Endurance Trophy.

In the “mini endurance” race, which lasted for 75 minutes this time, the Team 598 duo once again prevailed. This gives Stefano Nari and Emiliano Bellucci their fourth consecutive victory, remaining unbeatable thus far. The extremely fast pair Alberto Rota and Mauro Poloni (Team AR#28), who led for the first half of the race, had to settle for second place, which still keeps them in the running to win the Trophy. Putting in an outstanding performance behind them was Team Zard (Graziano Milone - Francesco Varanese), on the podium for the first time. 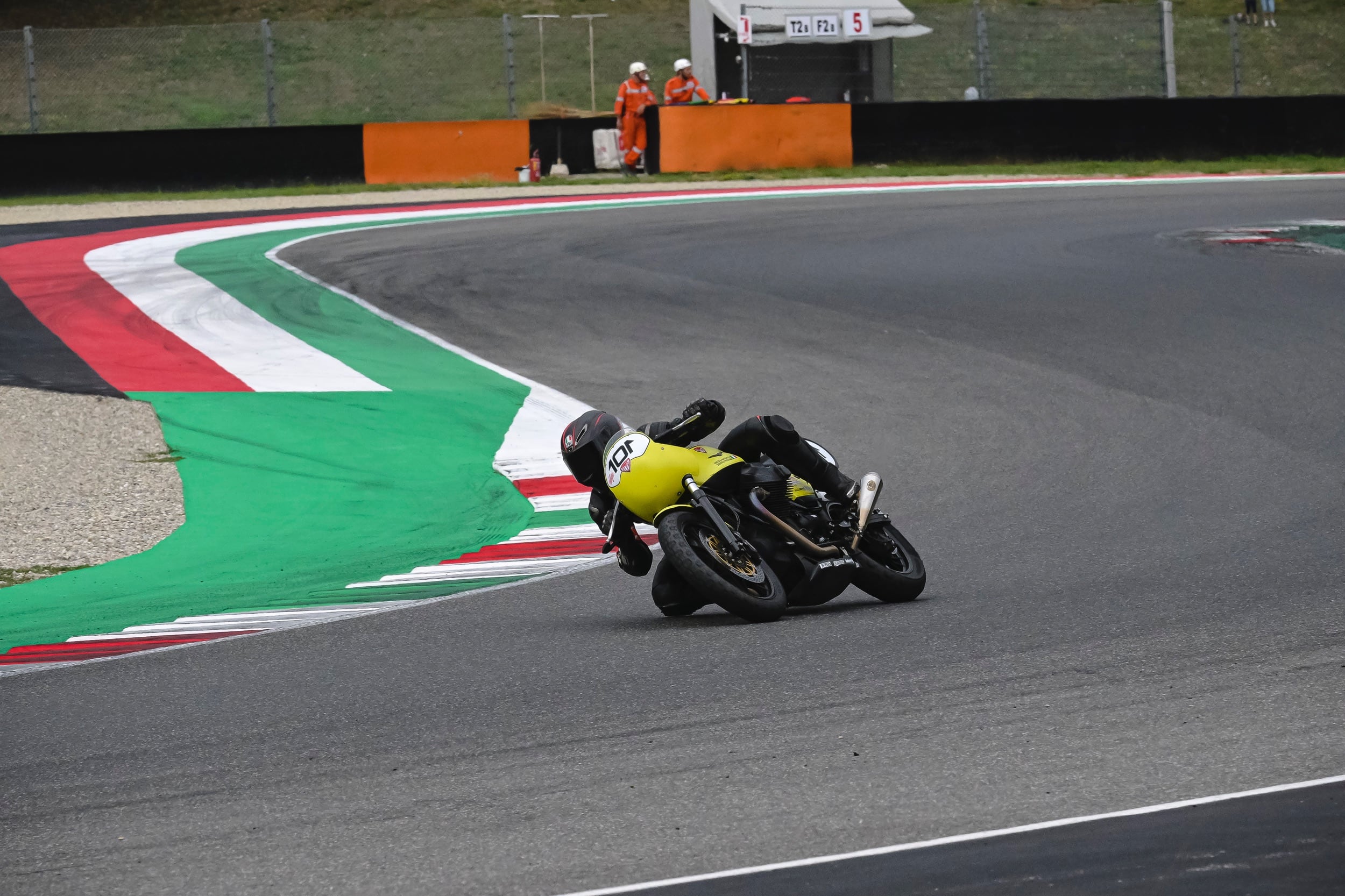 Team 598 leaves Mugello with full marks, now at 80 points, but the battle for the Trophy is still wide open. The Guaracing Factory Team 1 (Rubini-Rizzardi), fifth at Mugello, trails with 60 points, whereas AR#28 is now up to 58. Team Zard (52 points) and Tulli Racing VMS (Loghà-Bonavolta), with 49 points, are mathematically still in the running in view of the grand finale of Misano on 15 and 16 October, where two races are scheduled, the first of which at night.
The race fast lap went to team Scuderia Vecchia Modena Bull Bikes with Sandro Caprara - riding alongside Mauro Ansaloni - who did an incredible time of 2’15”523 at an average of almost 140 km/h.
In the 750 class, reserved exclusively in 2022 for the V7 III bikes that livened up the first three editions of the Trophy, this second consecutive victory by team Nuova M2 Racing brings Nicola Marcato and Franco Piccirilli back up in the overall standings, now second with 64 points, just 2 behind the Team Rapaci 1 (Luca Fornasiero-Mauro Rossignoli) duo, second at Mugello with their fourth consecutive podium finish. It was third place and their first emotional podium for team In Moto Con l’Africa (Cristiano Franco-Alejandro Facundo Perriot).
The next round will be in Misano, where the thrills will continue with the race on 15 October that will be held at night, with the floodlights and the headlamps of the V7 machines, mounted only on this occasion, lighting up the track. On Sunday, 16 October, the “mini endurance” will be raced to close out the 2022 season. 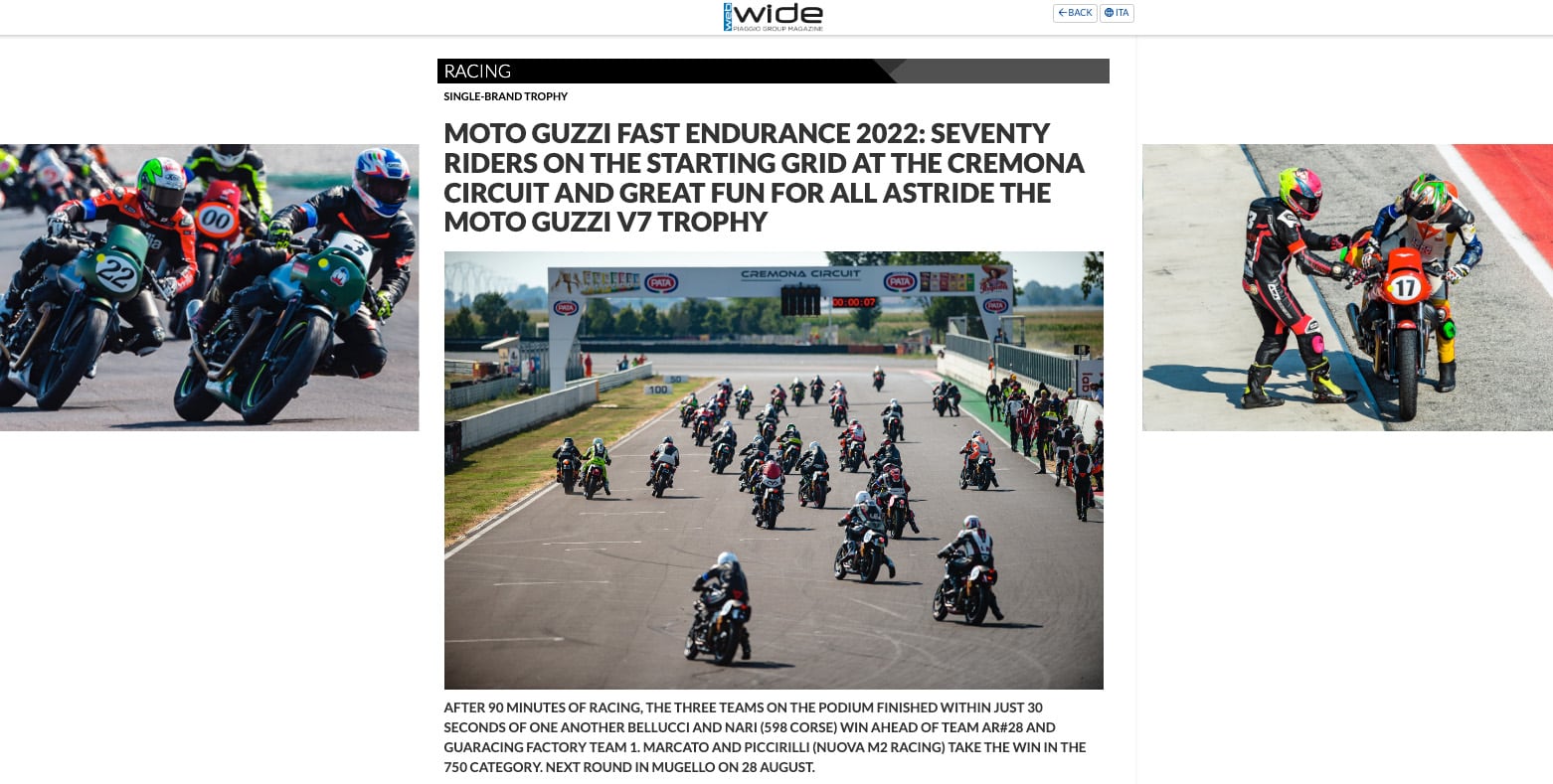