IN TRENTO AND BOLZANO

THE 25TH RELIGION TODAY FILM FESTIVAL KICKS OFF. AND ON 16 SEPTEMBER, THE PROJECTION-EVENT OF THE DOCUFILM “RIDE BACK TO FREEDOM” BY AUSTRIAN DIRECTOR HERMANN WEISKOPF IS SCHEDULED

On the left, the Festival programme cover ( www.religionfilm.com/it),
source: rtff.it/wp-content/uploads/2022/08/RELIGION-TODAY-FILM-FESTIVAL-program-2022.pdf
On the right, the docufilm poster, synopsis, and trailer: www.ridebacktofreedom.com

September 2022 – The “Religion today festival” was launched in 1997 as the first Italian spiritual film festival and interfaith dialogue and it has become the leading international and itinerant film festival of religions. The intention of the festival is to promote the culture of peace and dialogue among people, populations, and faiths. I 2022, it is celebrating its 25th anniversary, an important milestone. Organised by BiancoNero, a Trento-based non-profit cultural association, every year, the festival renews its “voyage through differences”: worship, beliefs, and views of the world, but also styles and languages, for a mutual enrichment in reciprocal interaction and understanding. Alongside the film competition, Religion Today proposes spaces for discussion and comparing notes with a "laboratory of cohabitation" between film makers and cultural operators of various faiths and nationalities. Each edition takes an in-depth look at a theme of the year and includes special events, times of scientific discussion, and activities for schools of every order and grade. Source and info: www.religionfilm.com/it

SOURCE AND INFO ABOUT RIDE BACK TO FREEDOM: www.ridebacktofreedom.com

“RIDE BACK TO FREEDOM” PROJECTION- EVENT. On 16 September, at 7:00 p.m., a special event at Piazza Cesare Battisti in Trento, where Austrian director Hermann Weiskopf will also be attending with his Vespa GTS, both also “actors” in the docufilm “Ride back to Freedom” (“2 wheels in search of the freedom lost during the Coronavirus era”), which tells the story of the trip taken in 2020 (at the end of the first lockdown) from Innsbruck all the way to Lampedusa, astride his Vespa, travelling through Italy with director of photography Bernhard Freinademetz who followed him in a subcompact car (also Italian - a Fiat Panda).
The director Weiskopf announces, “At the gathering place in the centre of Trento, there will also be other film makers who made the film with me. Then, at 8:30 p.m., the film will be projected in Cinema Multisala G. Modena and, after that, we’ll all be together, the film crew, the public, and I, to talk, wandering with our minds, reflecting on the concept and value of freedom, taking some memento photographs.” Any and all local Vespisti will obviously be more than welcome. Weiskopf himself has extended the invitation. “Reach out to me at info@avgproduktion.com or 0043-660-6516432, I’ll be more than happy to hear from you! The showing at Cinema Modena is free while seats last!”. Info: cineworld.18tickets.it/film/10530?ref_date=2022-09-16 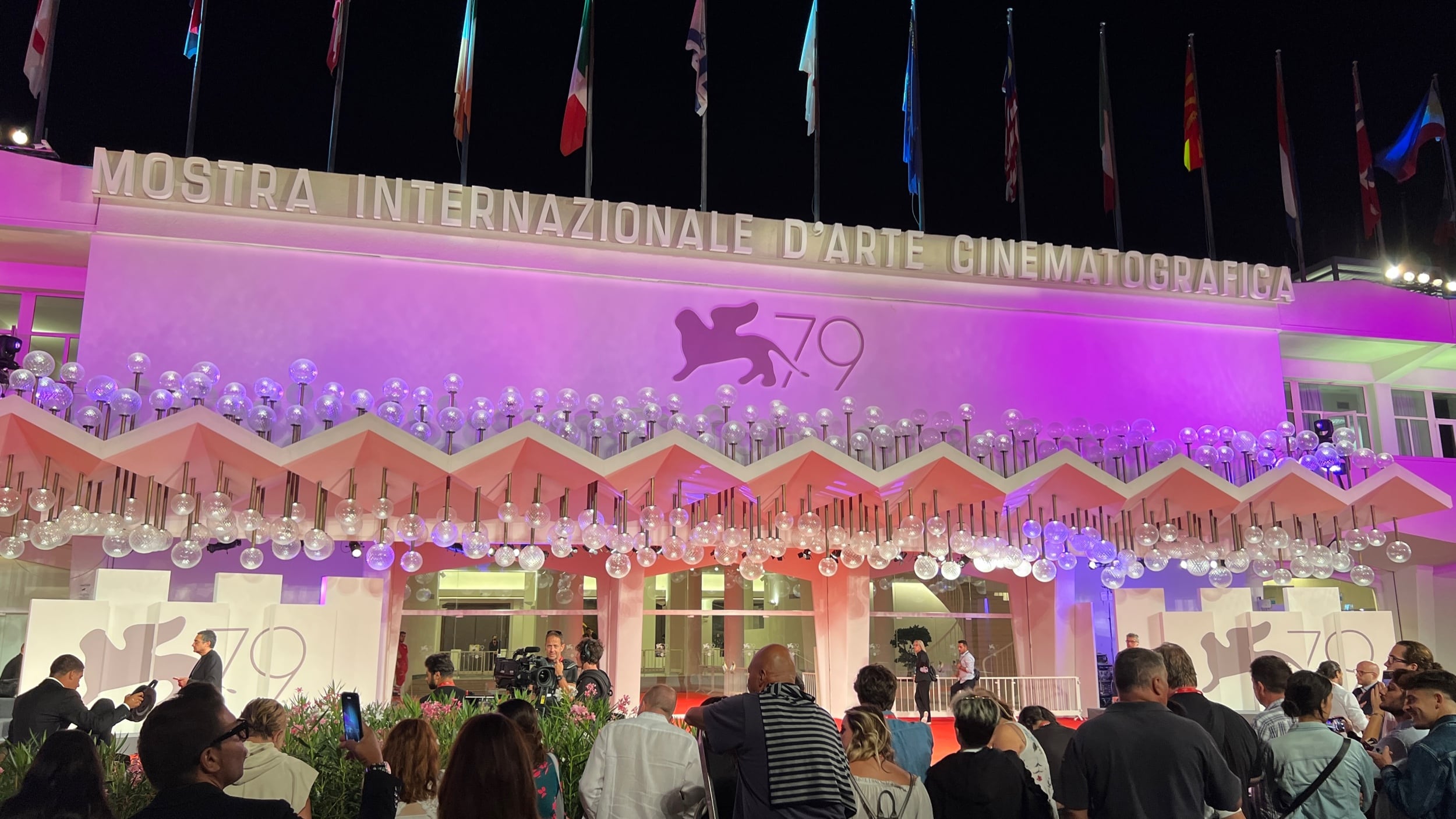 PRESENTATION EVENT IN VENICE. The 25th Festival in Trento was presented at the 79th edition of the Venice International Film Festival (Lido di Venezia, from 31 August - 10 September 2022). The event was held at Hotel Excelsior in Lido di Venezia, where organisers, supporters, and film makers like director Hermann Weiskopf were in attendance. There was also a round table discussion (on 4 September) on the topic of “Dialogue between faiths seen from a female perspective” where Anita Evelyn Stokes Hayford participated, former Ambassador of Ghana in Italy. Here are some photos. Others can be found on the Festival Facebook page here:
www.facebook.com/religionfilm

Other photos from Venice: Hermann Weiskopf and the co-producers of “Ride back to Freedom” Norbert Blecha and Roberto Bessi; with them is young Enzo, the director’s son.

THE EUROPEAN TOUR CONTINUES. It has been more than a year that the film “Ride back to Freedom” by the Austrian director has been making its way through Europe, garnering favour everywhere it goes from critics and the public. From Budapest to the tour of Austrian cinemas, from the Venetian presentations (2021 and 2022) to the “Garda in love” playbill, all the way to the Trento festival. And the tour continues. Next stop: projection-event and meeting with the director at the prestigious Austrian Forum of Culture in Rome, scheduled for Thursday, 29 September 2022, 7:00 p.m. in the spectacular headquarters at Viale Bruno Buozzi 113 in the Capital. Vespa enthusiasts have been personally invited by Hermann Weiskopf, the “director-Vespista” (contact info: info@avgproduktion.com or 0043-660-6516432). 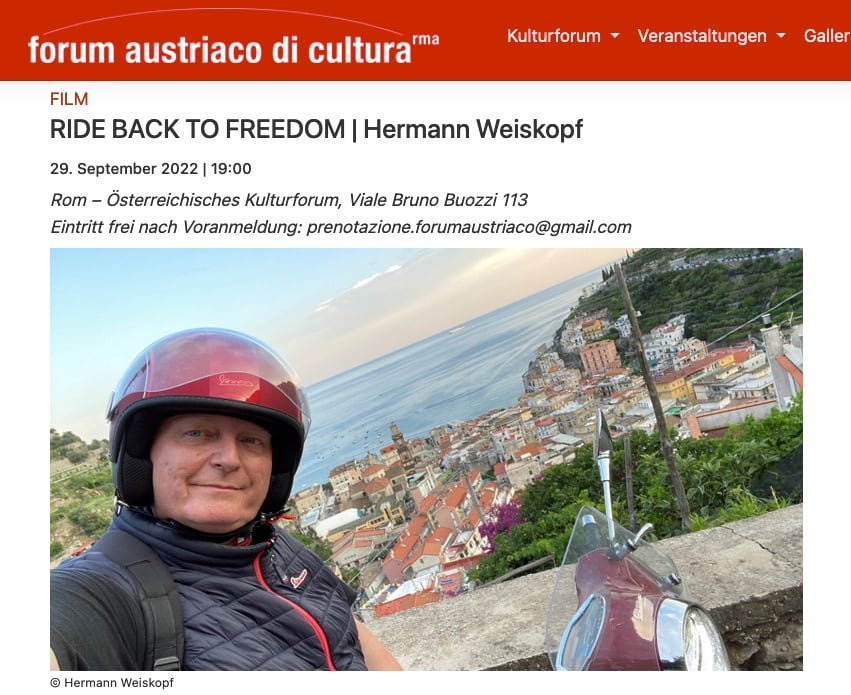