SUMMER ITALIAN STYLE, WITH VESPA: THE “POSTCARDS” OF THE CELEBRITIES

September 2022 – The summer is almost at an end, but the celebrities’ “postcards” remain to keep the memories alive of the 2022 fair-weather season, with Vespa playing a huge part, the perfect symbol of Italian style. In chronological order, starting from the most recent “sighting”, the first mention goes to Madonna who spent her holidays in Sicily, celebrating her birthday. On her Instagram profile, the pop star greeted the Italian island (“la Isla bonita”, as she called it), before heading back to New York, with an Italian style photo shoot, wearing clothes designed by famous Italian stylists and posing astride an ultra-Italian Vespa PX 150 with a super chic black livery. Super glamour images, with plenty of approval from her followers (18.5 million). 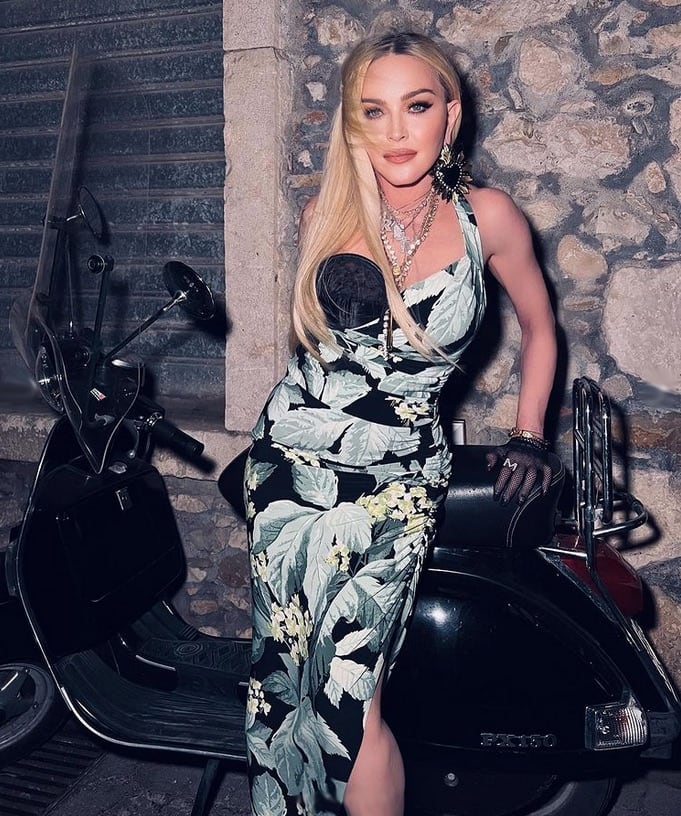 Gregorio as Gregory: the world champion swimmer, Italian Gregorio Paltrinieri evoked memories of American actor Gregory Peck as protagonist of the official video for the Rome 2022 European Aquatics Championships (1,500 athletes from 50 nations, 11-21 August): “Greg” is astride a red Vespa Primavera, with Ukrainian athlete Karyna Snitko, riding through the most iconic locations of the Capital. Drawing inspiration from the American film “Roman Holiday” (1953), starring Gregory Peck and Audrey Hepburn, which put Vespa in the global spotlight.

The Wide article, ahead of the event:
wide.piaggiogroup.com/en/articles/events/rome-2022-european-aquatics-championships

The 36th edition of the European Aquatics Championships was a success in every way, with Italy dominating. An unforgettable summer of sports. And this was the final palmares. 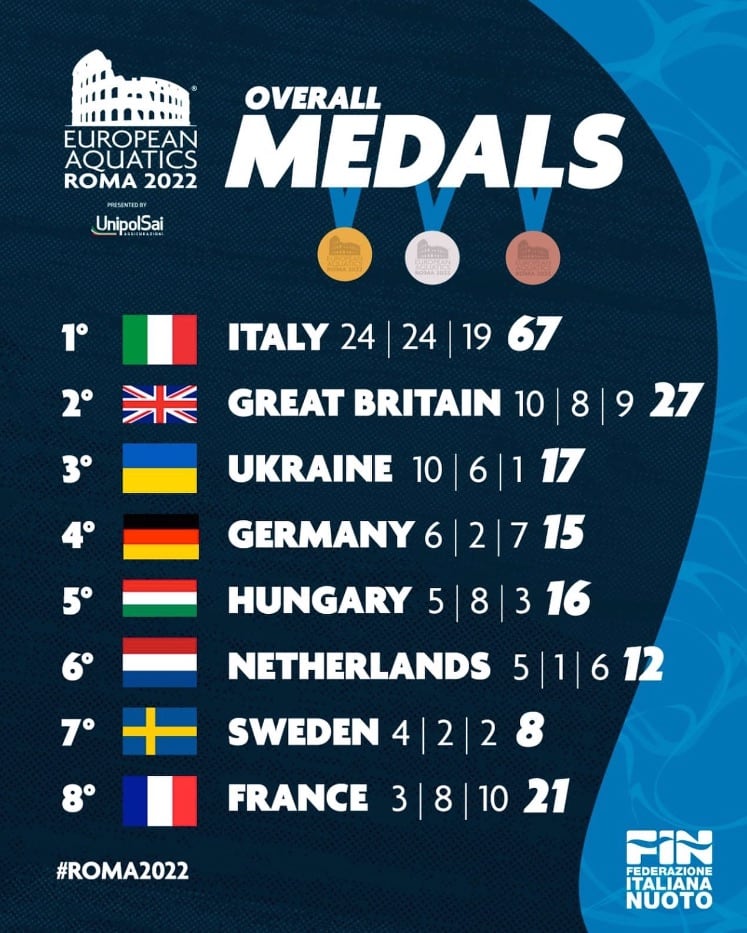 In Lucca (Tuscany, Italy), 20 thousand fans mad about Justin Bieber for the first – and only Italian 2022 stop – on his “Justice World Tour” 2022-2023, which take him around the world. Justin performed in the setting of the Lucca Summer Festival (Sunday, 31 July), and the fans went wild. Many were camped out along the historical wall of the city a day ahead of time just to be able to see the concert. And the Canadian star put on a great show for them, livened up by a dance crew and spectacular images, lights, and sounds that bounced off the giant screen.

To see him again in Italy, you’ll have to wait until January 2023 when - on the 27th and the 28th - he’ll be performing at the Unipol Arena in Casalecchio di Reno (Bologna). 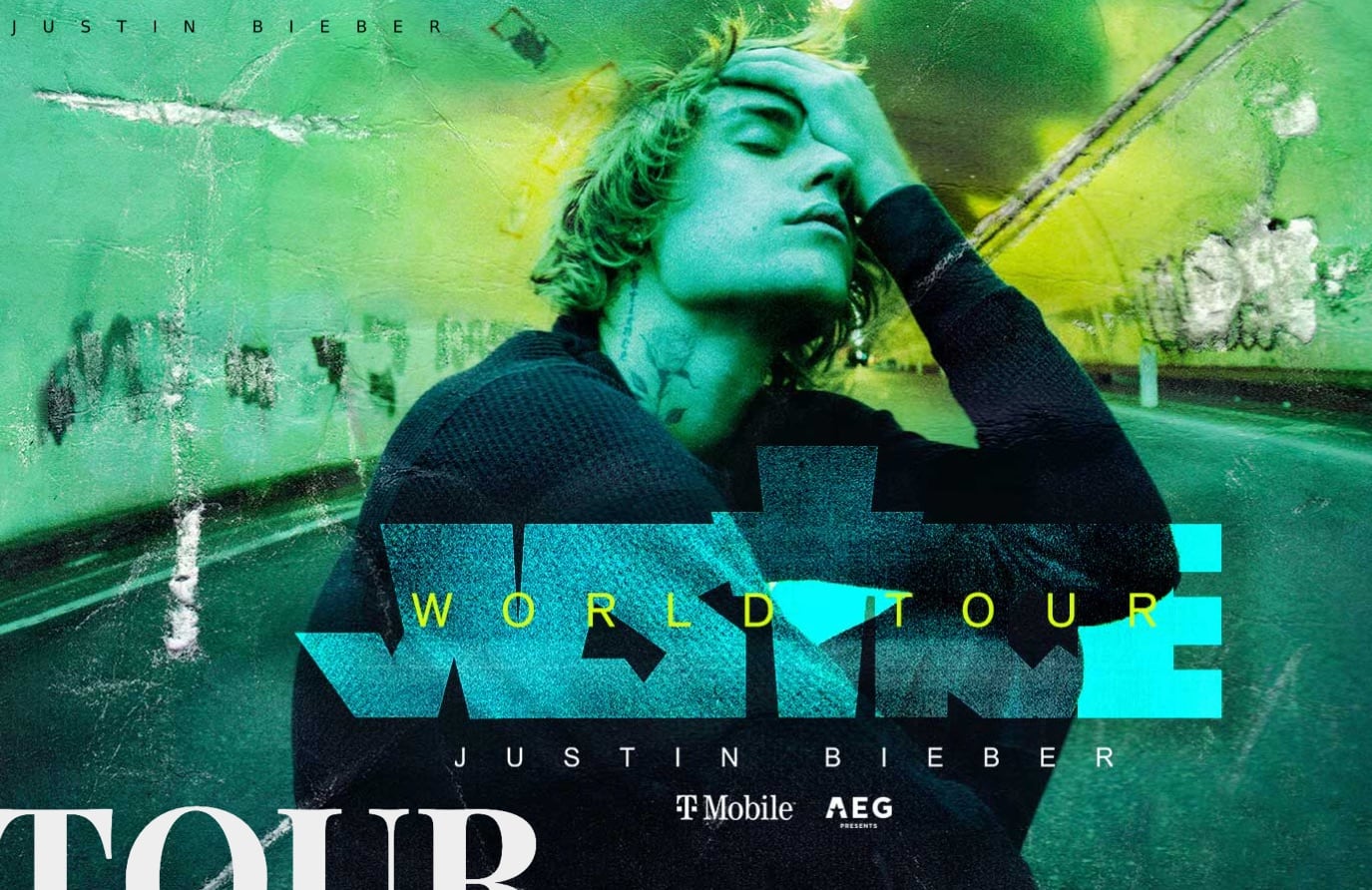 On the stage in Lucca, while waiting for Justin to arrive, a video was played that explained the singer’s collaboration with Vespa, which led to the creation of the Vespa Justin Bieber special edition.

Vespa Official video.
Behind the scenes of the coolest collab ever - @justinbieber x Vespa

He had this to say about this collaboration: “I got the opportunity to design a Vespa - thank you @vespa”, posting on Instagram the official photos where he was featured.

After the concert in Lucca, Justin (beloved pop star: 91 million followers on FB, 252 million on Instagram, 22 million on YouTube) spoiled himself with a few days of holiday in Italy, visiting Florence with his wife Hailey Baldwin, taking in art and beauty (Academy of Fine Arts), relaxing, and enjoying romantic dinners. A visit that “triggered” fans and the press. 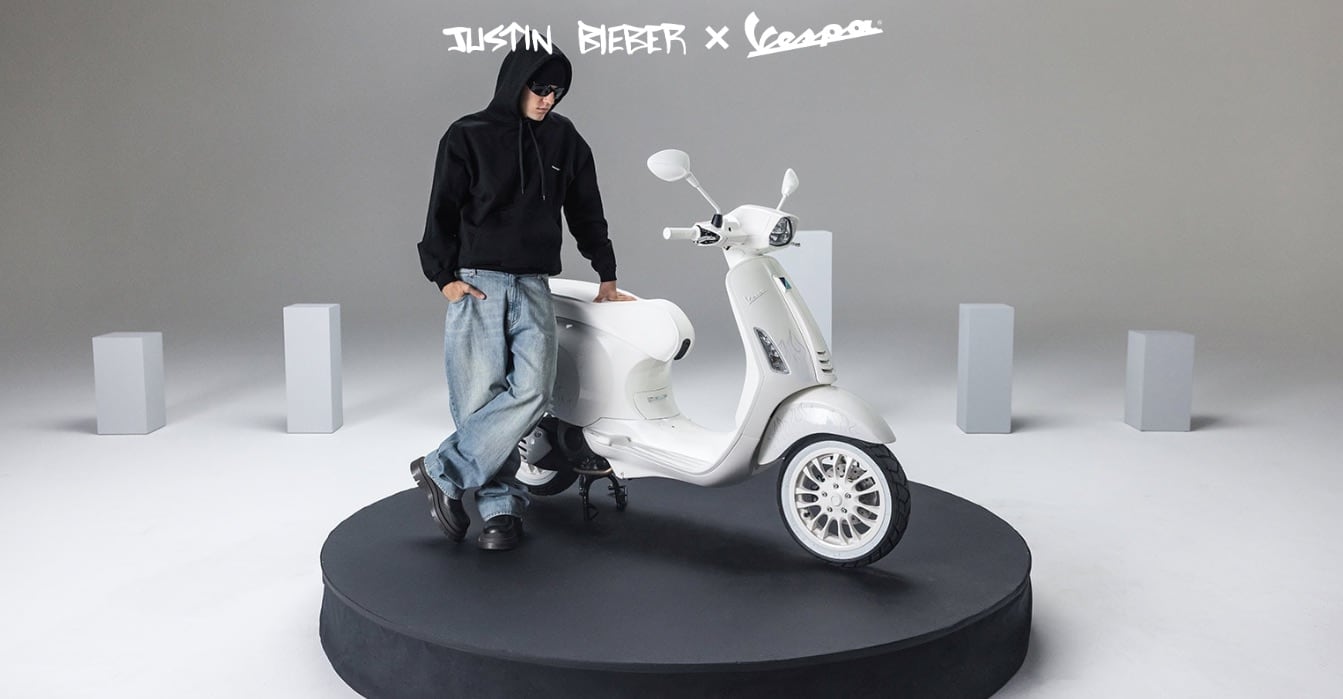 And, speaking of celebs + Vespa + Italy, we would be remiss not to mention “Ferragnez” (Ferragni+Fedez) in Portofino, astride a Vespa 946 Christian Dior. The images that the famous Italian influencer and entrepreneur Chiara Ferragni posted on her Instagram profile (more than 27.8 million followers) at the beginning of the summer season went viral straight away: her astride a Vespa 946 Christian Dior with her husband Fedez at the controls and both wearing coordinated Vespa CD brand helmets. What style!

The Vespa Christian Dior model, a concentrate of elegance and joie de vivre, was created to celebrate the 75th anniversary of Vespa and the Parisian maison, also founded in 1946. Chiara Ferragni has a special “bond” with Vespa since her first, a 125, that she received as a gift at 16 years of age. Subsequently, she has often appeared astride various Vespa models and she gave her son Leone a blue toy mini-Vespa.

HERE THE ENGLISH TRANSLATION OF THE ARTICLE. CHIARA FERRAGNI: VESPA AND ME. THE MOST FAMOUS ITALIAN BLOGGER AND INFLUENCER ON AN INTERNATIONAL LEVEL AND THE MOST FAMOUS SCOOTER IN THE WORLD. SHE TELLS THE STORY: MY FIRST VESPA AS A BIRTHDAY PRESENT WHEN I TURNED 16. She needs little to no introduction: Chiara Ferragni, 30 years old in May, Cremona native, famous international blogger, also known as The Blonde Salad (from the name of her blog). In just a few years, she became one of the most followed and highest paid trend-setters and influencers. In 2010, she was a guest at the MTV TRL Awards. Four years later, she had a turnover of $8 million and more than ten million the following year. She became the subject of a case study by none other than Harvard Business School, then a global testimonial for global brands. She also posed for the American edition of Vanity Fair and rocketed to the covers of the most important fashion magazines in the world, from France to Mexico. In 2016, Forbes placed her on the “30 Under 30 Europe” list. “Chiara and the Vespa: an everlasting love!”. Chiara is an undisputed icon of style, just like her favourite scooter: Vespa. And here – in one of her posts from a few years ago entitled “Habemus vespam”, complete with a nice photo shoot – this is how she described her bond with the most famous “two-wheeler” on the planet. An everlasting bond. So much that we could have called this article: “Chiara and the Vespa: an everlasting love!”.
By Chiara Ferragni: “My first means of transportation as an ‘adult’ was my grey Vespa 125, which I received for my 16th birthday and which I used to zip around the streets of Cremona, feeling terribly mature at that point. Then another two Vespas joined the family, both vintage. One was my father’s, and one was my sister, Francesca’s. When I moved to Milan at 19 years old, I lost the ‘right to use’ my first Vespa which quickly became my little sister’s treasure, who accepted it with enthusiasm. Ricky, on the other hand, has always loved big motorcycles... For some time now we had wanted to get a ‘two-up’ Vespa to use here in Milan. There is nothing more convenient for zipping around from one appointment to another in the city, especially during the hot months. The Vespa arrived... and we finally ‘inaugurated’ it...”
And Chiara still rides a Vespa through the streets of Milan: on 30 July 2017, she posted a photo on Instagram of herself astride a Primavera with an elegant blue livery and cream-coloured seat, complete with windscreen and top box. A shot that was “liked” by more than 309 people. As confirmation of her fame as super blogger & golden girl. 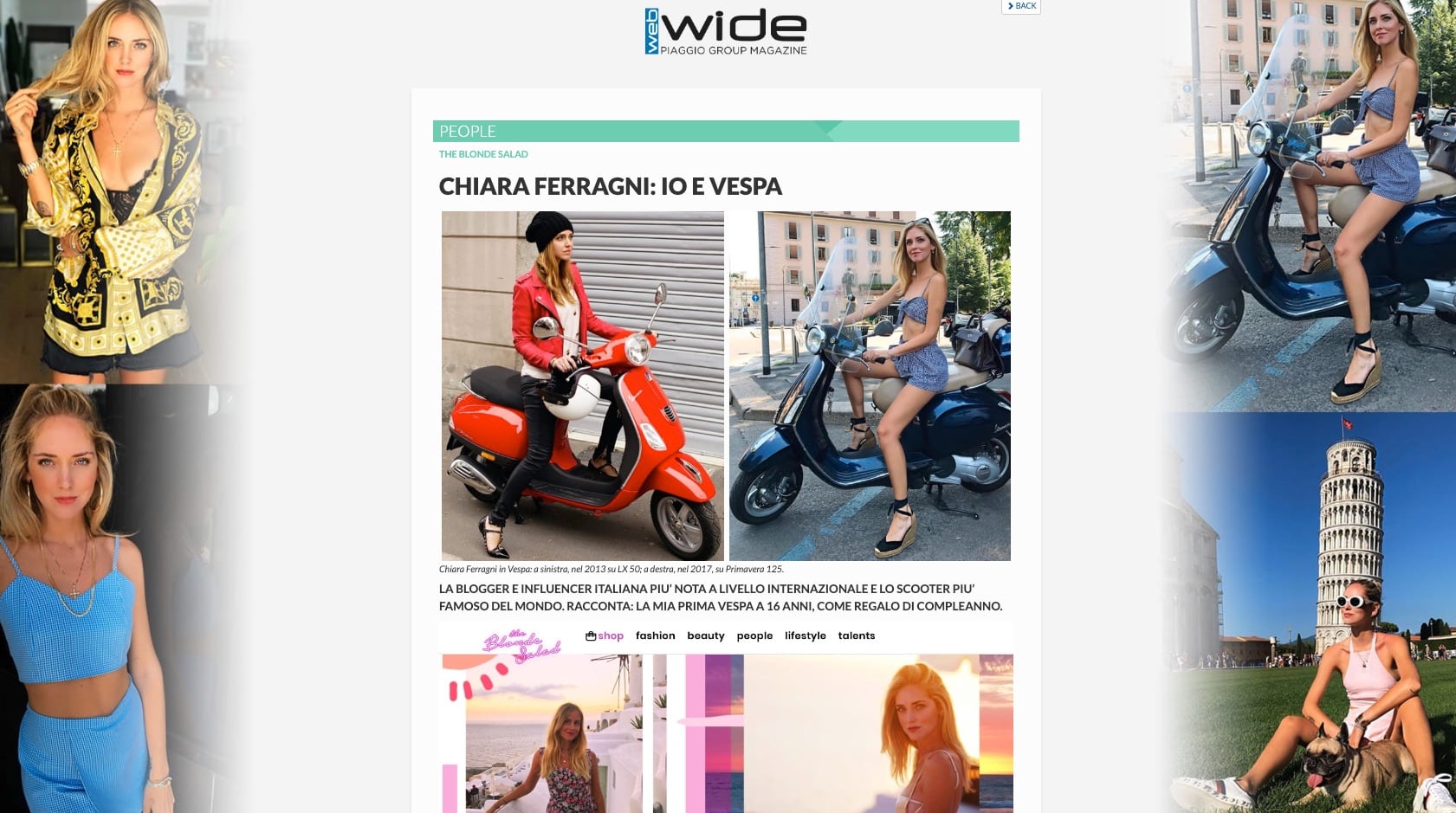