A MUST-ATTEND EXHIBIT/EVENT: “THE PAINTERS OF THE LIGHT. FROM CARAVAGGIO TO PAOLINI”, CURATED BY VITTORIO SGARBI 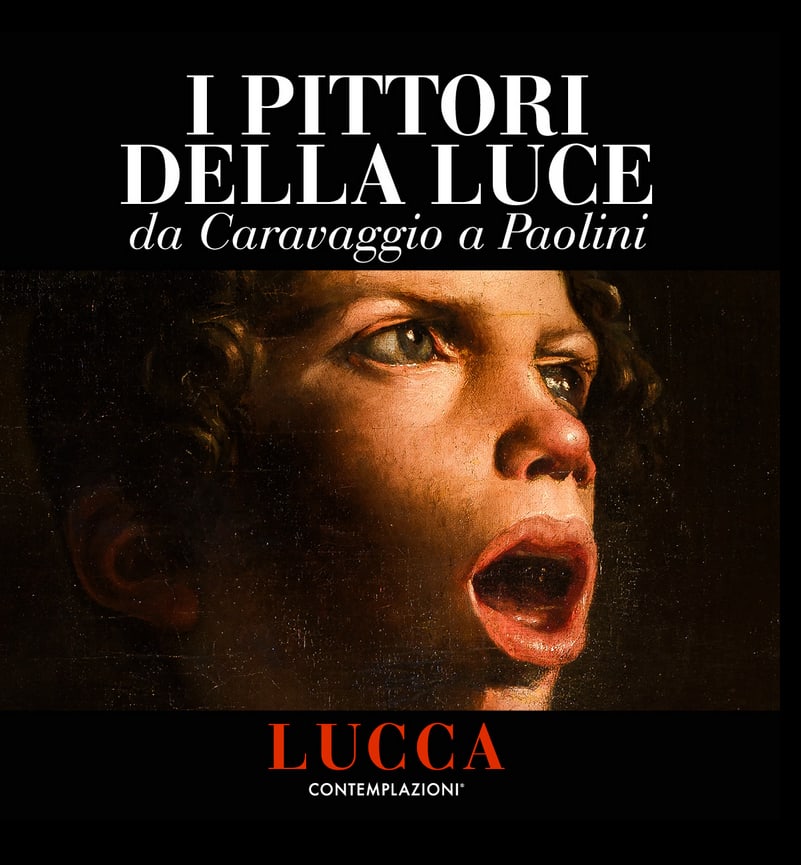 Lucca (Tuscany), June 2022 – Outside, the elegant and bustling city of Lucca; inside the Cavallerizza (in piazzale Verdi), an oasis of beauty and wonder in benevolent silence, where you can immerse yourself, wrapped in the absolute black of the walls. Where extraordinary and skilfully lighted works of art stand out. Visitors, raptured, flow from hall to hall, whispering, and most remain silent, preferring to listen to the audio guide (highly recommended) that illustrates the major masterpieces on display in this truly must-see exhibit, curated by Vittorio Sgarbi, “The Painters of the Light. From Caravaggio to Paolini”. Even those who are neither experts nor passionate about art find a reason to be here: to be astonished, to have a unique and extraordinary experience, to fill their eyes, mind, and heart with beauty, to compensate, if only for a few hours, for that which is not beautiful in the world. Coming out of the “light” of the works of art to return to the outdoor light, your mood is better and your senses restored. Yes, this exhibit is “therapeutic”. Word of Wide.

AFTER ALL THIS DARK
THE LIGHT RETURNS TO LUCCA .
VITTORIO SGARBI.

INSIDE THE EXHIBIT (press release and images: Contemplazioni). From 8 December 2021 through 2 October 2022, in the spaces of the Cavallerizza in Piazzale Verdi, Lucca hosts an impossible exhibit capable of recounting, through some masterpieces of the seventeenth century, the role of light in paintings by Caravaggio, the first director of the history of art, all the way to Pietro Paolini, Lucca native and protagonist of some of the most important aesthetic themes of the new naturalistic school. 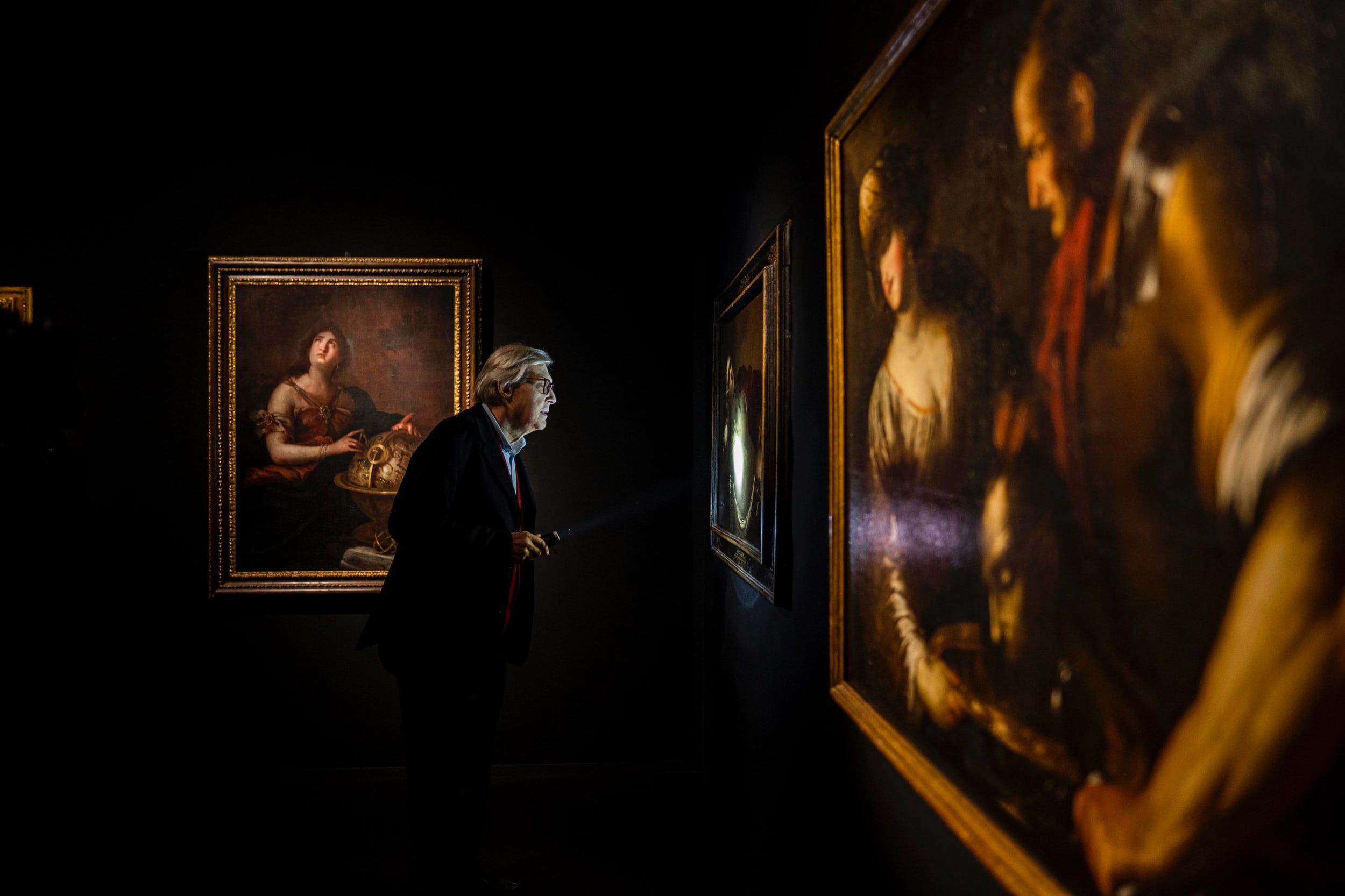 “The exhibit begins from the revolution of Caravaggio, evidential, with the presence of an extremely noteworthy work like the Tooth Puller on which, for size and type, Paolini surely had to reflect, bearing witness to the most integral consistency between painters of light.” Vittorio Sgarbi.

Over 90 works – from Italian and foreign museums, from dioceses, as well as from prestigious private and international collections – of the numerous painters who, for their entire lives, followed Caravaggio, met him, some perhaps surpassing him, or who were even in some ways ahead of him. They are the luminists, called “the Painters of the Light” here because in all their works, light is the true protagonist. Vibrant, indispensable, innovative. Caravaggio is so great because everything in his paintings, from the light to the cut of the composition, brings an art to mind that we recognise, a trace of sensitivity and experiences that are not those of the seventeenth century, but those of every century in which humankind has been present and central. 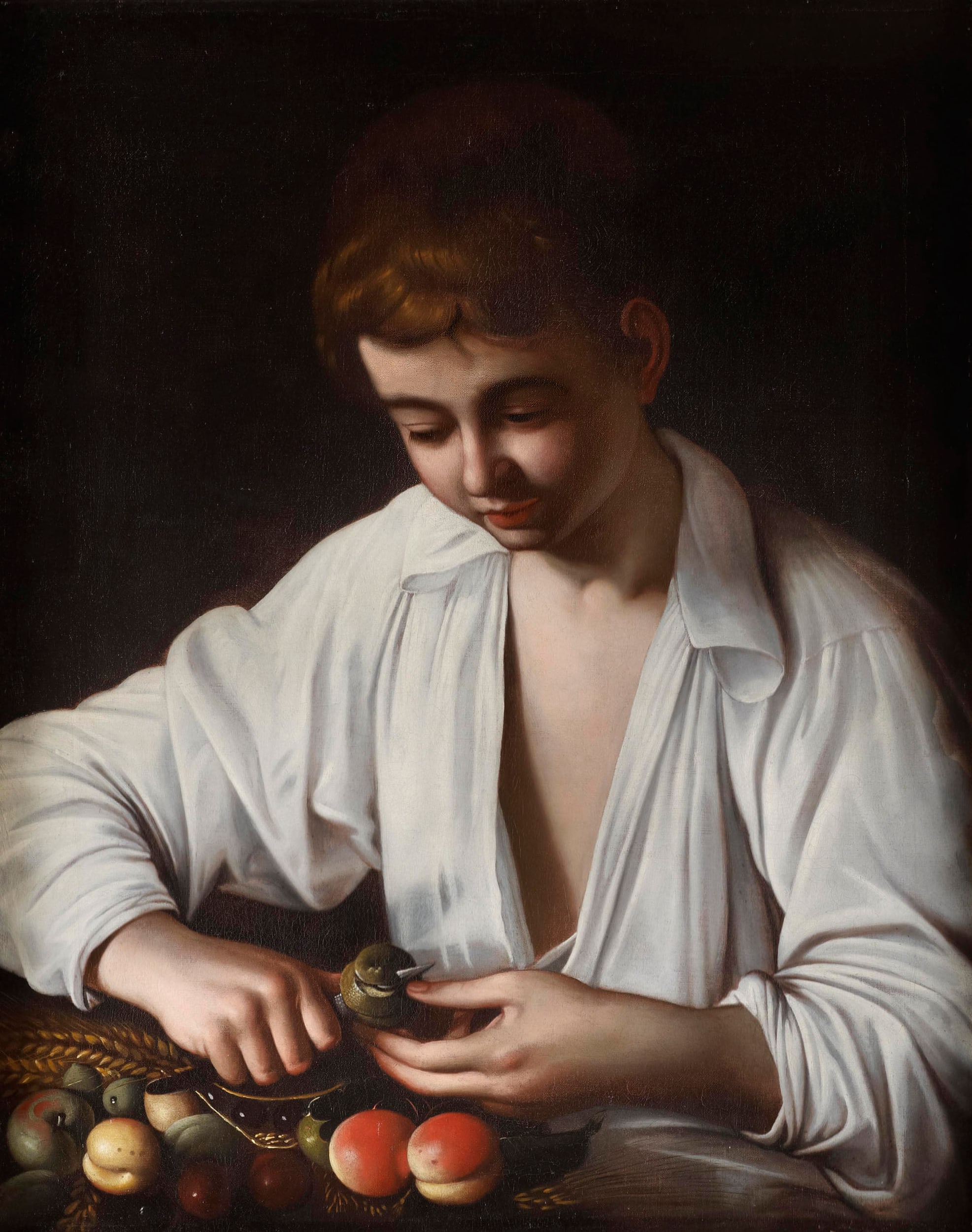 Three fundamental moments of his artistic production can be admired in the exhibit. The first, in chronological order, is the Boy peeling fruit, a young, intimate, pure work, filled with soft and reassuring light, painted during his Roman début in the mid-nineties of the sixteenth century. We are in the first room of the exhibit path, and we find ourselves before the most important image of the mature Caravaggio: the Burial of St. Lucy, the material copy that belongs to the FEC. A cardinal work, created after escaping from the Maltese prison and arriving in Syracuse as the altarpiece of the Santa Lucia al Sepolcro basilica on the site where, according to tradition, the saint had been martyred and interred. 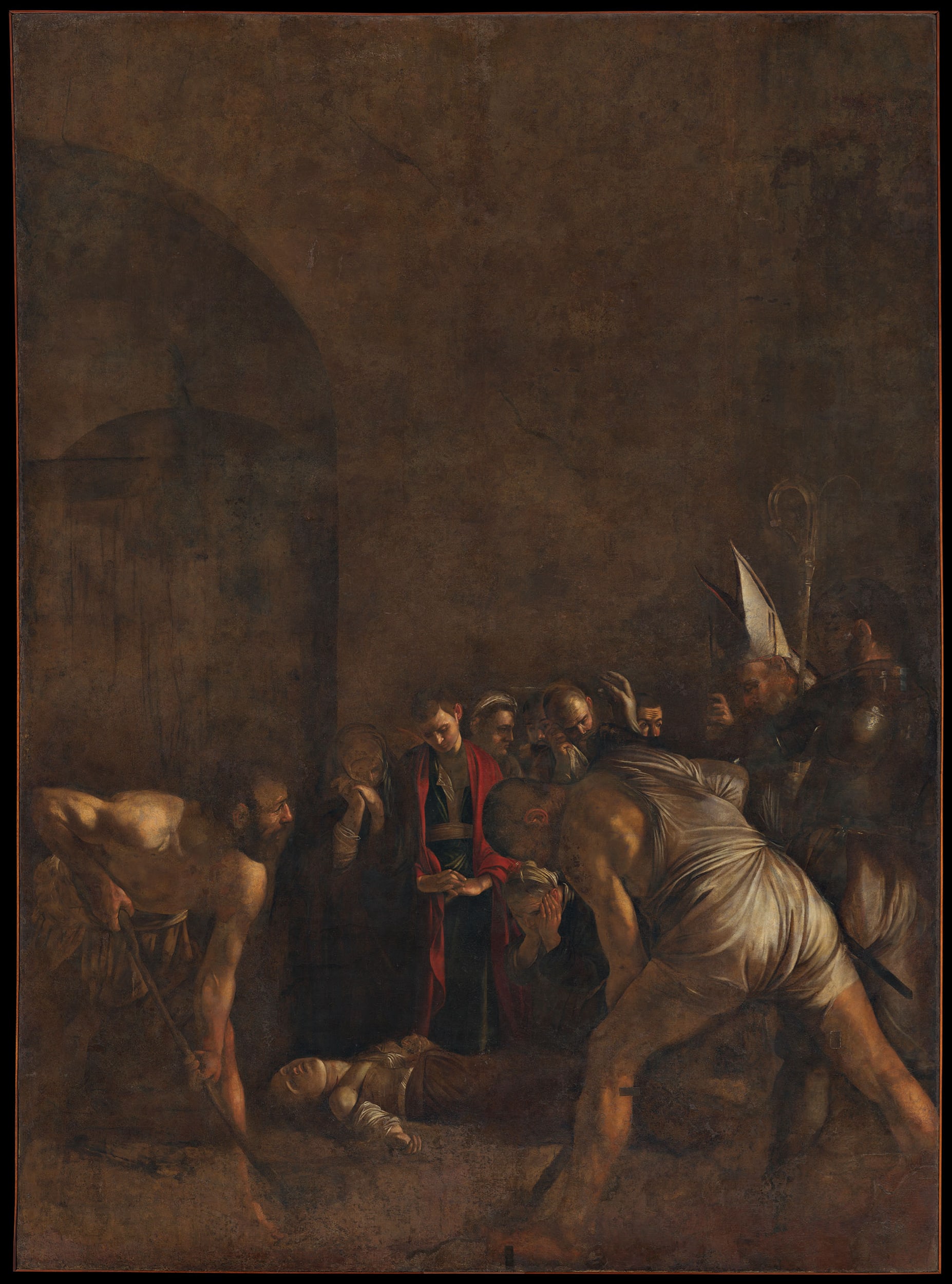 Alongside it, a noteworthy painting from the Uffizi Gallery and on loan to the exhibit until March: Tooth puller, which fully represents Caravaggio’s revolution and bears witness to the bond with Pietro Paolini’s art (Lucca, 1603 – 1681). 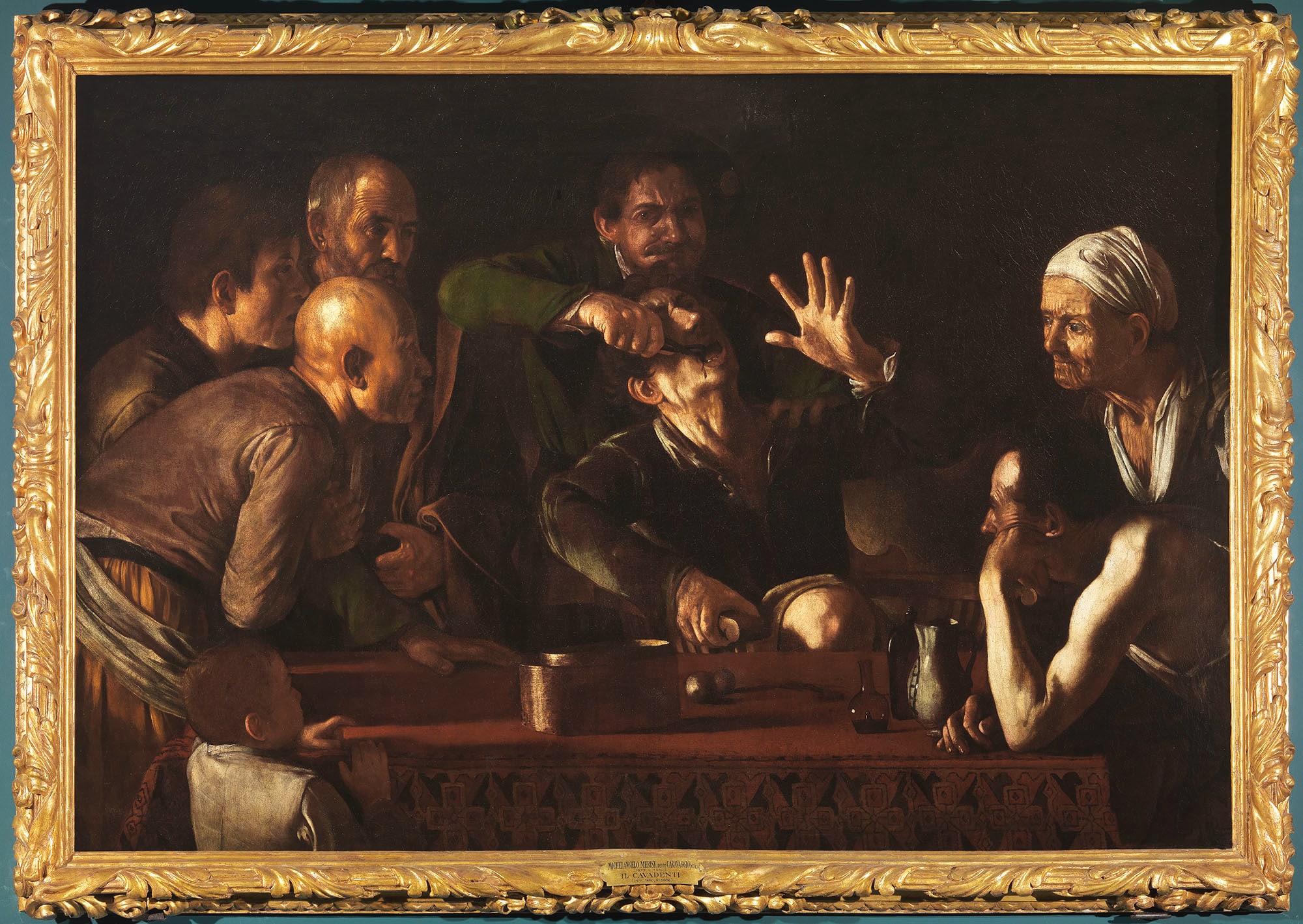 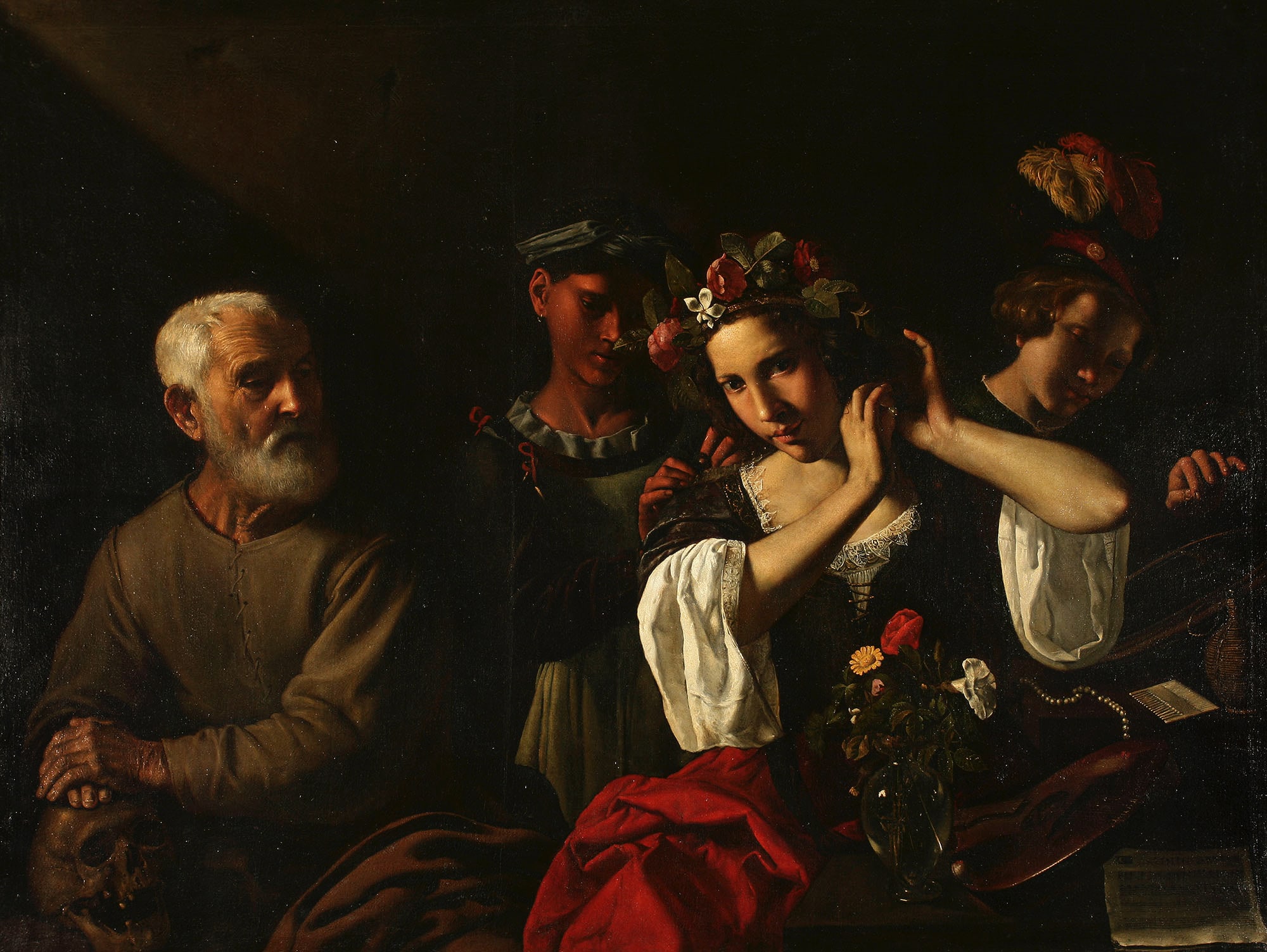 Pietro Paolini, The Ages of Life.

In Ricchi’s case as well, Paolini’s lesson, veered in special effects, derives from a Caravaggio following, all playing with candlelight, beginning from the torch of Caravaggio’s Seven Works of Mercy, through the model of Trophime Bigot (Arles, 1579 – Avignon, 1650), a reckless experimenter of admirable backlight effects, certainly astonishing.
Worth a mention is Orazio Gentileschi (Pisa, 1563 – London,1639), considered one of the most important Tuscan Caravaggio followers, in the exhibit with an unreleased and elegant Madonna and child taking first steps. 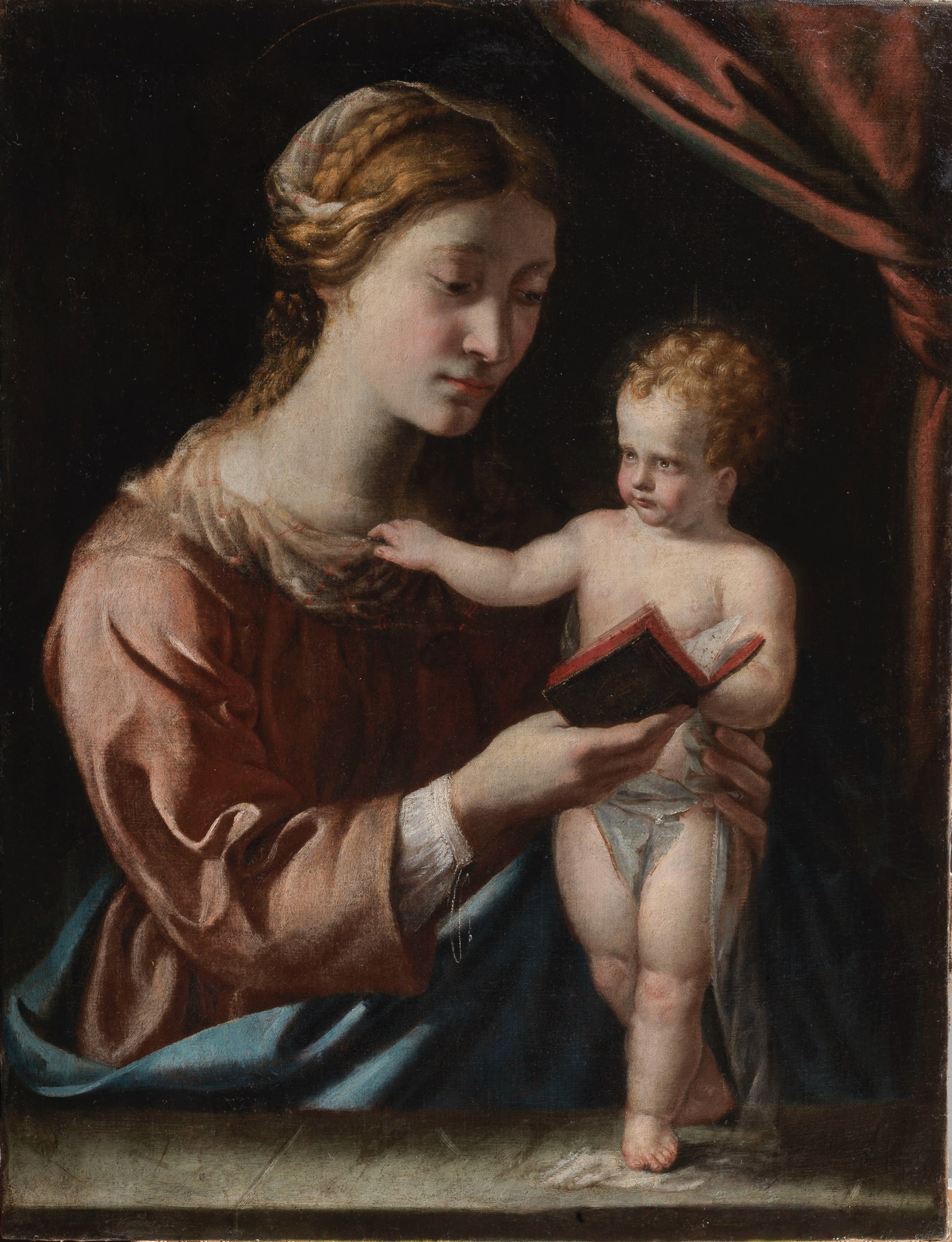 Through Caravaggio’s “contaminations” in Roman art, we find artists such as Giovanni Baglione (Rome, 1566 – 1643), Giovanni Antonio Galli, known as the Spadarino (Rome, 1585–1652), Bartolomeo Manfredi (Ostiano, 1582 – Rome, 1622), and Giovanni Francesco Guerrieri (Fossombrone, 1589 – Pesaro, 1657), in which affinities of composition with Paolini’s production are clear.
The last Caravaggio is all in artificial light. The first response to these nocturnal settings comes from Peter Paul Rubens (Siegen, 1577 – Antwerp, 1640) in Rome when, in 1609, he painted his Adoration of the Shepherds for the Church of St. Phillip Neri in Fermo. A virtuoso work of special effects where the child is like a cocoon of neon light shining on the surrounding characters.

After Caravaggio’s death in 1610, Spaniard Jusepe de Ribera (Jàtiva, 1591 – Naples, 1652) and Frenchman Valentin de Boulogne (Coulommiers, 1591 – Rome, 1632) were the two most important protagonists of naturalist painting in Rome. Unlike Ribera, who settled in Naples in 1616, under Spanish domination at the time, Valentin’s entire career was spent in Rome. The French artist easily moved throughout the subjects tackled by the master with astonishing and innovative results, especially for the invention of a creeping and uniform light with pearl reflections. He is the painter that Paolini himself is closest to in stylistic and conceptual terms.
Those Caravaggio inspired atmospheres also permeate the canvases of Battistello Caracciolo (Naples, 1578 – 1635), whose works are rich with lighting effects in radical terms, as well as those of Mattia Preti (Taverna, 1613 – La Valletta, 1699). The latter shares a sort of escape from reality with Paolini in favour of a theatrical style representation with significant scenic effects.
Caravaggio’s influence is significant in artists the calibre of Alessandro Turchi, known as the Orbetto (Verona, 1578 – Rome, 1649), Giovanni Serodine (Ascona, 1600 – Rome, 1631), Matthias Stomer (Amersfoort,1600 circa – Sicily, after 1650). 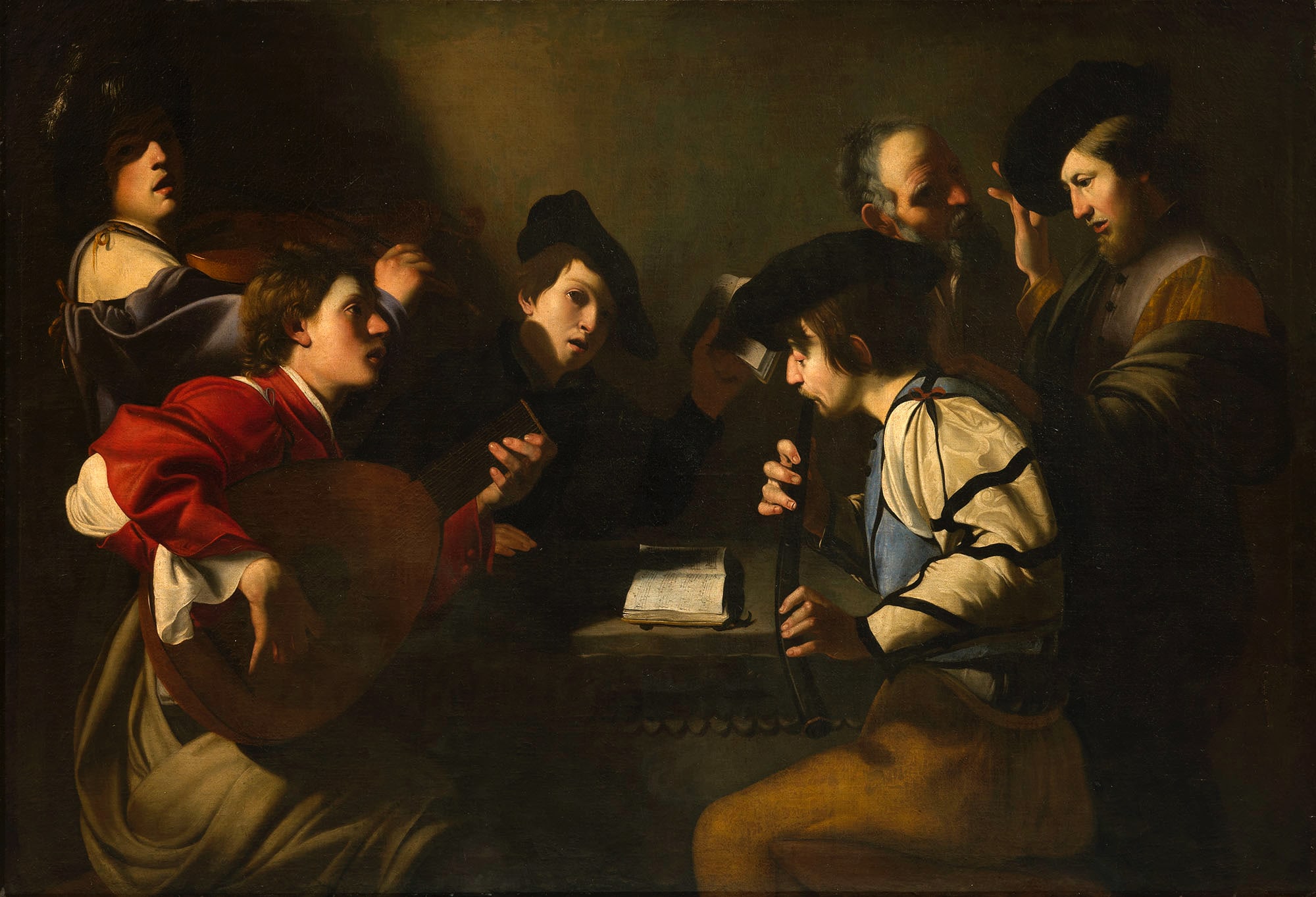 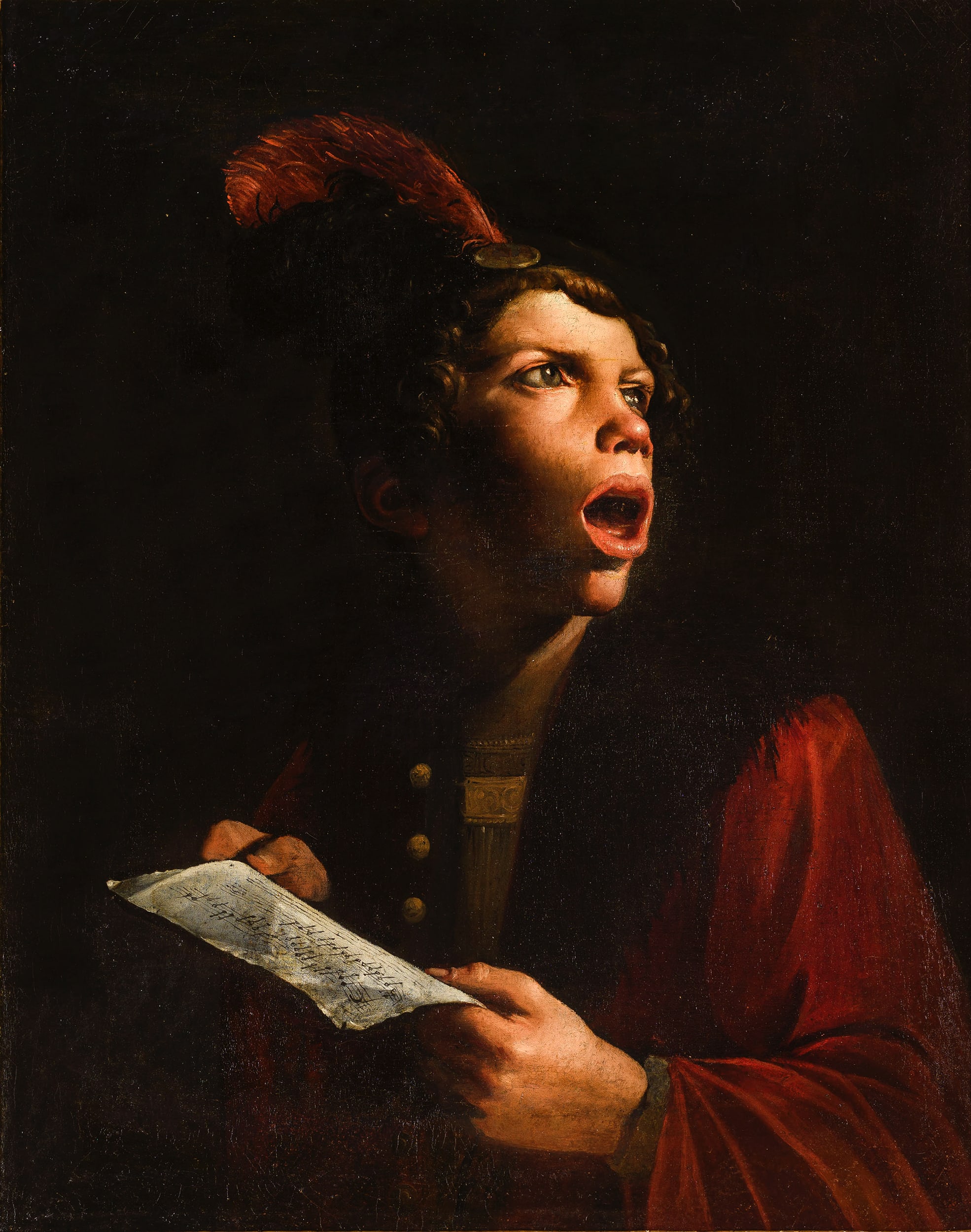 THE ARRANGEMENT. The real surprise lies in the arrangement, with the majestic sculptures of Cesare Inzerillo and Marilena Manzella which emerge from the dark walls in close dialogue with the paintings they are reminiscent of with enlarged details. A Shroud, consumed by pain, to remember the passion of the martyrs and Christ. A Pear, extremely ripe, lost among the dead nature of the triumphant seventeenth century banquets. A Violet, mute, before Paolini’s Concert and his cantors.

And last, but not least, a Candelabra, which is about to fall on the passer-by who could, out of curiosity, divert his gaze from Pietro Ricchi’s flashes of light. Authentic presences, besides the sculpture and beyond the material, volumes, and ideal shadows, in perfect balance between drama and irony, death and life. Livening up the rooms is original music by Lello Analfino, genuine audio poetry constructed, recorded, composed, imagined, and desired. Undoubtedly heard by these artists who still move alongside us inside these rooms.
Source: Contemplazioni press kit. In the background images: detail of Boy peeling fruit (Caravaggio) and Sleeping cupid (Pietro Paolini).

CONTACTS. The exhibit, promoted by the Tuscan Region and the City of Lucca, is produced by Contemplazioni – which also handles artistic direction – and boasts the collaboration of the Lucca Fondazione Cassa di Risparmio, with several works from their collection exhibited, and the Lucca Chamber of Commerce and Lucca Promos. The exhibit is open to the public every day from 10:00 in the morning until 8:00 in the evening (the ticket office closes at 6:45 p.m.). Booking is not required.
The catalogue of the exhibit The Painters of the Light is available online and in the bookshop. From Caravaggio to Paolini, Contemplazioni publishing house, 2021, 400 pages, Italian language edition.

The exhibit site in Lucca. Source of images: Contemplazioni.