NEXT EDITION 2023 IN ARIZONA

AMERIVESPA, THE MEGA RALLY FOR AMERICAN SCOOTER RIDERS, WITH VESPA AS PROTAGONIST

Source of images and info: www.amerivespa.net

July 2022 – The passing of the baton has been announced: “Next year's Amerivespa shall take place in Flagstaff, AZ from June 1st through June 4th, 2023… The rally promises to be family-friendly with a chance to visit the Grand Canyon, to boot. The Twin Cities crew is rooting for you! See you in Arizona!” This was the message posted by the organizers of the 2022 edition, held from 22 through 26 June, between the twin cities of Minneapolis and St. Paul, namely the Twin Cities Scooter Collective with the Vespa Club of America (VCOA).
News, photos, and video clips are on the official Facebook page:
www.facebook.com/amerivesparally

AMERIVESPA 2022.
GOOGLE PHOTOS OF THE ORGANIZERS, WITH THE CONTRIBUTIONS OF THE PARTICIPANTS:
photos.google.com

About a thousand scooter riders from all over the United States, including a large number of Vespisti, participated in the 2022 big rally in Minnesota, on the banks of the Mississippi River. Amerivespa came about in 1992, connected to the founding of the Vespa Club of America (the national club with which dozens of clubs in various U.S. states are affiliated and which, in turn, is part of the Vespa World Club), and this year was its 30th anniversary. The scheduled for the event was, as always, full and diverse, including rides to discover the area, gymkhanas, banquets with competitions and prizes, markets, awards and entertainment, with the “National Vespa Parade Day” on Sunday, 26 June, to close out the big event.

One of the event’s big sponsors was The LEGO® Store Mall of America. At the beginning of the year, the Vespa 125 LEGO set was launched. And a set was put up for grabs for the rally participants. And, of course, the event was complete with a raffle which presented “a piece of Minnesota music history” this year, offering an extremely special 1974 Vespa 150 Super which belonged at one time to music star Ed Ackerson. Ed was front man for various local band, but his biggest impact was as producer and owner of Flowers Studio. 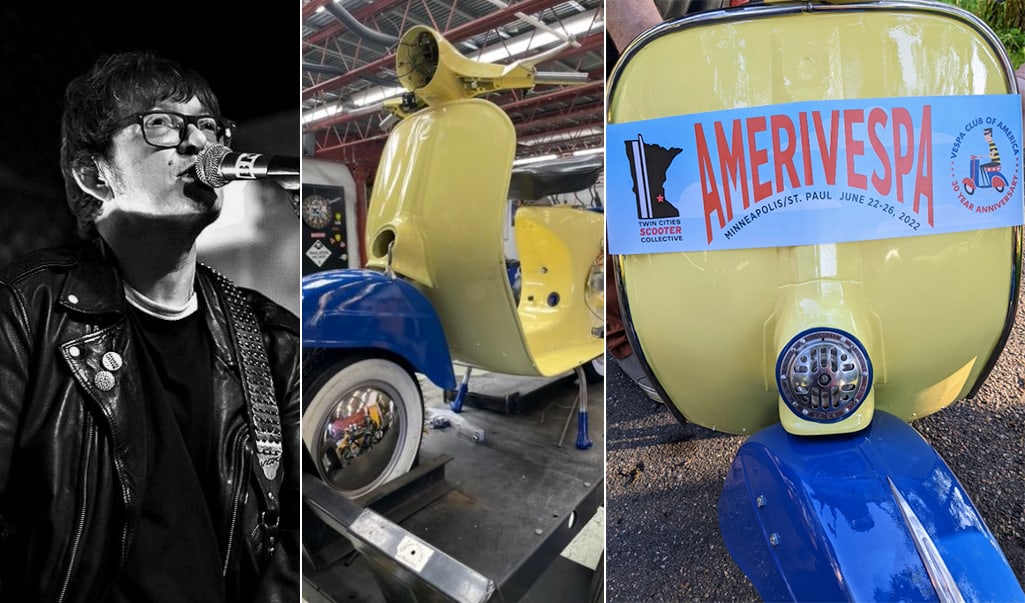 Ed produced dozens of records, including works by high profile artists such as The Jayhawks, The Replacements, Soul Asylum, Golden Smog, Dave Davies of the The Kinks, Mason Jennings, Brian Setzer, Lizzo, Pete Yorn, The Wallflowers, Rhett Miller of the Old 97s, and many more. Ed lost his battle against pancreas cancer in 2018. His scooter was assigned to the winning ticket, drawn during the final banquet on Saturday evening (the tickets were sold throughout all the Amerivespa events), with part of the proceeds from the raffle going to Pancreas Cancer Action Network in Ed’s name. The scooter was restored, with new tires, and repainted in the same colors - yellow and blue - as when Ed had it. The engine was left untouched because it was still running perfectly!

Amerivespa 2022 on Fox 9 News, with the President of the Twin Cities Scooter Collective, Carolyn Finch, and the President emeritus of the Kent Aldrich club:
www.fox9.com/video/1085201